If we wish to better understand Japanese gardens we can profit by taking a close look at Chinese paintings. The gardens are in some ways like 3-D visualizations of the paintings. Historically, Chinese paintings were collected in very large numbers by the cultural elite in Japan, they were studied by artists, aesthetes, cultural opinion formers, as well as garden creators. The compositional techniques of painting (such as the use of asymmetry, ‘empty space’, and perspective effects) came to be used in garden creation. Many of these concepts became embedded in the garden tradition, and can be clearly seen in historically important gardens such as Daisen-in and Ryõan-ji , but also appear in more contemporary gardens too.

The philosophical and aesthetic outlook of the Chinese painters also came to shape the Japanese garden tradition in important ways. For the painters the quality of ‘spirit’ was as vital as the ink they used. A painting may be deemed technically correct, but it would critically ‘fail’ without an infusion of the mystery of ‘spirit’. Through their expression of ‘spirit’ the painters developed an aesthetic language that explored a way of seeing landscape and the relationship of the viewer to that landscape. This way of seeing points us to the heart of gardens too. So whether we are creating a Japanese style garden or simply curious about their apparent simplicity and grace, having some idea of the connections between Chinese landscape paintings and the Japanese garden tradition can open new avenues of understanding and appreciation. 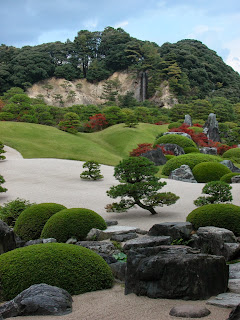 The Japanese garden tradition did not arise out of a vacuum, there have been many influences that have come to contribute to what we can see and understand as the Japanese garden today. The landscape of Japan itself, and the aesthetic tastes and inclinations of Japanese society itself have been important drivers in the development of the garden  tradition over several hundreds of years. Of all those influences one stands out in particular, Chinese landscape paintings. Japan received an immense continental influence from China, nearly every aspect of society was touched upon by this stream. Brought to Japan not only by Japanese who travelled to China on political missions, but also by Chinese and Korean religious figures and craftsmen who journeyed to Japan, some of who settled in Japan for extended periods of time. It is possible that among these people there were those with experience of creating gardens, though there does not seem to be absolute documentary evidence to back up such a supposition.[1]

Visitors travelling to China from Japan, and those arriving in Japan brought not only abstract knowledge, but they would have also brought artefacts too. Despite periods of isolation and political disassociation there was a steady stream of trade between the two nations. Paintings were highly collectable in Japan by the elite in society, and they were amassed in great numbers. Shogun Ashikaga Yoshimasa (1436-1490), the founder of Ginkaku-ji (the ‘Silver Pavilion’ in Kyoto) had a collection of over 11,000 paintings. The pavilion itself was created for the Shogun as a location where he would discuss aesthetics and hold tea ceremonies with an entourage of artists and other aesthetes.

The painter Sesshū Tōyō (雪舟 等楊 (1420 -1506) is one of the most renown painters in Japan and he was also recognised as a major artist in China during his day when he travelled there, and it is known that he also took a keen interest in garden building. Another example of a painter/garden creator is Sõami (相阿弥, d.1525) associated with the Ginkaku-ji temple garden. He was part of the Shogun’s circle of artistic advisers and was well known as a painter of Japanese landscapes in the Chinese ‘Southern School’ style (kanga). Sõami is also often cited as the designer of the gardens at Ryõan-ji and Daisen-in, but there is no defining evidence linking him with either garden. Kanō Motonobu 狩野 元信 (1476 – 1559 founder of the Motonobu school in Kyoto was also reputably another painter who tried his hand at garden creation, the karesansui garden to the rear of the hōjō, or main hall at Taizō-in (Myōshin-ji, Kyoto) is attributed to him and is known today as the ‘Motonobu garden’ (Motonobu no niwa). There were presumably others but the attribution of specific gardens has been lost in time. Generally one has to be wary of accepting associations of painters with gardens from the pre modern period, as there is usually scant evidence to qualify this, and it is more often enough based on hearsay.

In China landscape painting was regarded as the highest form of art, superseding even that of portraiture. Paintings were created on paper or silk and usually mounted as scrolls, they were painted with Indian ink in a wide range of tones or washes. Both painting and the appreciation of paintings were seen as cultural ambition, something that the elite in society engaged with very seriously. Similarly, prowess in calligraphy was seen as a mark and a measure of an educated person. In much of East Asia the natural landscape was viewed as being the setting of the ultimate source of leadership and authority. It was in landscape that humans sought to communicate directly with the deities at sites thus designated as being sacred places. In China, it was in, and through the landscape that emperors derived their political, moral and spiritual authority by identification with the divine. There has been a centuries old practice of retiring to remote regions in the landscape; this is not exclusively an Asian practice, witness also the establishment of many early Christian religious centres in remote and places difficult of access such as Iona, Lindisfarne etc.

“In much of East Asian elite culture the landscape was traditionally an image of spiritual freedom, religious power and moral transcendence of the ambitions and avarice of ordinary life in the capital or the various regional centres.” [2]

The creation of gardens was an extension of the notion of sacred landscape, by creating ‘landscape gardens’ the intention was to provide a place to attract the deities to, and to create a space in which people could communicate with the deities. In time this idea became secularised, but that does nothing to fundamentally undermine the link between gardens and the notion of the sacred. Painting was another means of encapsulating the same desire for identification with the divine, to participate in the transcendence of mundane existence. To view a painting, as to view a garden, was to seek to participate in the landscape being depicted, to internalise and identify with that landscape, and in so doing break down any intellectual division between self and object.