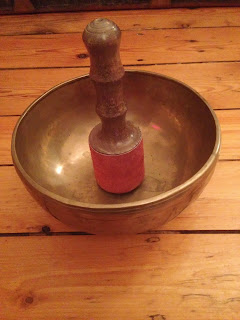 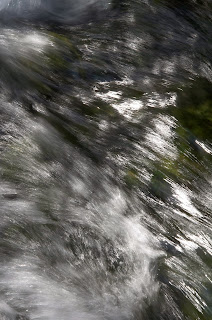 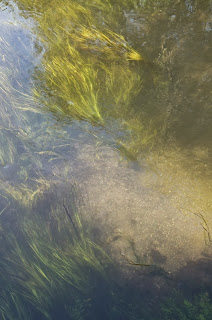 The path shapes my body
To its inward curve,
Enfolding silence
Awash with sound. 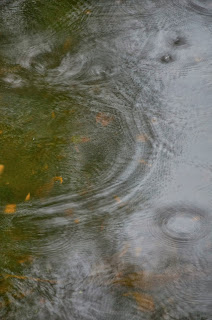 The swollen belly
Of mother to be -
Flowing also in water
The flowing of new flesh
& consciousness. 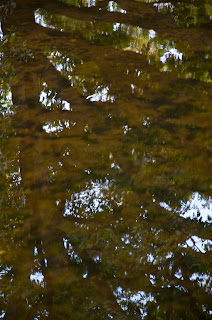 Balanced in equity of being
The point of transformation,
Stealthy magick afoot
Single light in dark night
Burns of promised creations. 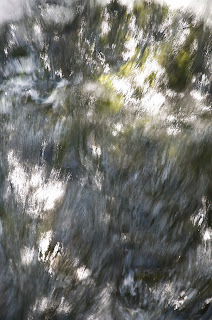 To follow this blog: the 'Follow by E-mail' facility is now operating. Don't miss a beat and sign in.
Posted by Robert Ketchell at 11:48 No comments: 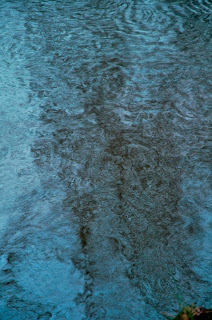 Slipping out of form
Dissolved in formlessness –
Naked in soft winter rain. 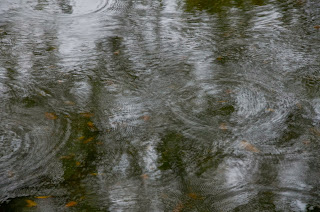 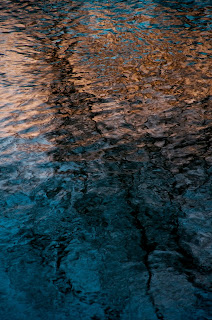 Down here
At the bottom of the cycle,
The bell rings
Then again –
Everywhere water droplets
Hitting the glimmering leaf carpet. 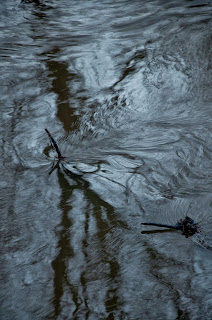 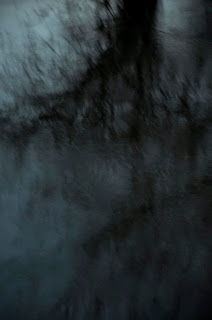 
To follow this blog: the 'Follow by E-mail' facility is now operating. Don't miss a beat and sign in.
Posted by Robert Ketchell at 14:51 No comments:

Oh, how we crave answers
Responses to every shiver of desire-
Sitting still, finding no thing,
Just breath. 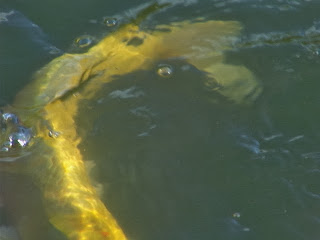 As if a falling shadow
The last crow reaches the roost –
Barely half past four. 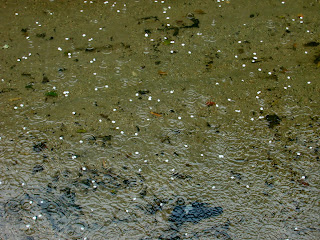 Returning to the stream
Hoping to bathe in its music –
Clouds massing for rain. 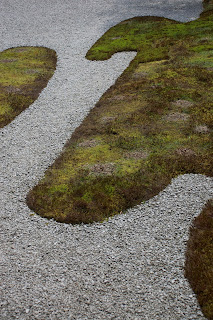 Perhaps its winter’s gift
This lack of words for the world –
Empty pages and the poet. 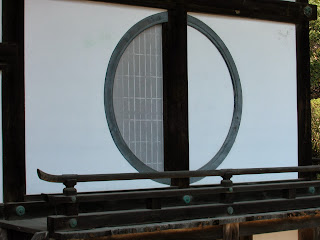 Weaving our narratives
Into self-sustaining truths and beliefs,
So forgetting wind songs and leaf poems.
In this way we lose the path
Blind to the trees within the trees
And stumble over the rock strewn way.
Just breath, no mind required. 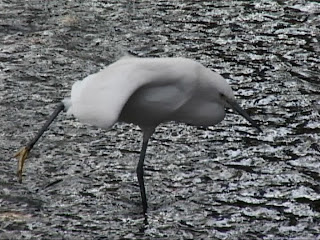 What of the dreams and aspirations
Of the earth itself,
Wherein its murmuring sigh of contentment,
Does it contract at our oncoming footfall?
Oh Beauty desiring to be known
To be placed in the light of awareness
No pushing for the river.

To follow this blog: the 'Follow by E-mail' facility is now operating. Don't miss a beat and sign in.
Posted by Robert Ketchell at 22:34 No comments:

A Brief History Of Japanese Gardens


The Japanese garden tradition is one of the oldest continuous garden traditions in the world. The creation of gardens dates back to the time of the earliest official contacts between Japan and its continental neighbour China in the 7th century. In China the practice of landscape gardening was already highly developed and practised on a very sophisticated and extensive scale. Landscape gardens were created following the Paradise model. They were intended to recreate an idealised landscape, in effect creating a suitable abode for the deities on earth; in the anticipation by doing so that it would encourage the gods to reside on earth in closer proximity to human society.

The Heian period (784 - 1185), which began with the founding of a new capital, Kyoto, heralded a great flowering of the arts and culture in Japan. Culture remained the preserve of the minority, essentially the aristocracy. In particular, the garden tradition was to rise to prominence during this time, and a distinctly Japanese identity to gardens begins to emerge.

One of the characteristics of the period is the emergence of a particularly Japanese style of architecture, shindenzukuri. The shinden, or Main Hall, sat at the centre of the architectural complex, with roofed corridors extending out to the east and west sides, these in turn leading to pavilions. The area immediately to the south of the Main Hall was usually a flat gravelled courtyard (which was used on ceremonial occasions, in which two trees considered sacred - a mandarin orange and cherry - were planted). Beyond this, the garden was centred about a large pond, which was used for boating and situated in the pond would have been an island. The garden itself was landscaped in such a manner as to suggest a variety of different landscape settings, mountain landscapes, seascapes, riverine landscapes, marshes, and so on were created. A great variety of planting material was used specific to the type of landscapes being recreated in the garden.

It was popular to create sections of gardens which recalled or referred to scenic natural landscapes both in Japan as well as China. The aristocracy travelled rarely little beyond Kyoto itself, so these features in gardens became popular. The practice also indicates how important an ingredient the imagination of the viewer was in interpreting, understanding and appreciating the garden scenery.

In the early 11th century a manual of garden creation was complied, the Sakuteiki ('Records of Garden Making') is one of the earliest such books in the world. It covers many subjects in detail, from the different styles of gardens, use of stones and plants, to various taboos associated with gardens.

The end of the Heian period was marked by the decline in influence of the aristocracy, and the rise of the military class (samurai), as the predominant social class. At first, the samurai sought to maintain and imitate the garden and architectural styles of the nobility. In the gardens of the 12th through to the 15th centuries we find gardens such as Tenryu-ji, Saiho-ji, Toji-in, Ginkaku-ji and Kinkaku-ji, which retain elements of the Heian styles while at the same time striving towards new ideas and means of expression.
The samurai were attracted to Zen Buddhism for its directness of expression, and they encouraged the spread and establishment of Zen temples. In the Zen temples a new style of garden gained popularity, the ‘Dry landscape’ or karesansui garden. Several monks achieved renown for their skills in garden creation. Zen temples are composed of two parts, the south-facing element is the ‘public’ section with reception rooms and the main prayer hall, and the north side of the temple is the ‘private’ section, where monks live and study. On the south side of the main hall was a large courtyard, usually enclosed by a tile-topped wall, the ground level spread with sand or gravel, which was used as a ceremonial space, known as the yuniwa. It was in this space that the karesansui gardens characteristic of Zen temples were developed,  and may be seen today. The gardens were not created specifically for the purpose of meditation rather they were gardens which were intended to reinforce the quality of sacred space associated with the temple..
From the 16th century onward one finds the emergence of a new style of garden, the Tea garden or Cha niwa. Essentially the Tea garden was a path (roji) which led to the tea house, and became a means by which the participants could prepare themselves for the ceremony. The garden deliberately down plays extravagance, rocks are small (if used at all), and the planting is predominately evergreen. Particular emphasis is placed on the layout of the path itself, as a means of influencing the manner in which the viewer is conveyed through space. Such features as stepping-stones, stone water basins and lanterns, which are now widely accepted as part of the fabric of a Japanese garden were first used and developed in the context of the Tea garden.

At the beginning of the Edo period (1603 - 1867) the seat of government was relocated from Kyoto to the small fishing village of Yedo (now Tokyo), which rapidly developed into a major city. There was a resurgence of estate gardens around Imperial residences, and also in particular around the homes of the leading samurai. They were required to have by edict several residences in the Edo are, the purpose was to soak up as much of their cash as possible, so they would not spend money on fermenting political troubles! Later, with the rise of a wealthy mercantile class, private gardens began to develop, albeit in fewer numbers. During the rise of Japan as an industrial superpower, many fine gardens were created for wealthy industrialists. Some survive to the present day, but are unfortunately rarely accessible to the public.

The Imperial gardens of Katsura Detached Palace, and Shugaku-in Rikyu are outstanding examples of gardens of the mid to late Edo period. Though relatively large in scale, the gardens incorporated many influences from Tea gardens. Katsura which was created in the early 17th century is a masterpiece of architecture and garden making. In many ways it has come to encapsulate the notion of 'Japanese style'

In the Edo period pruning techniques became popular. Clipped hedges began to appear in gardens, sometimes making dominant features. Azaleas and other shrubs would be planted en masse and clipped into controlled shapes. Garden creators such as Kobori Enshu (1579 - 1647) created innovative gardens by this means. The variety of plant species in gardens gradually simplified in number, and evergreens form the bulk of plantings. Many gardens are simply planted only with azaleas and pines.

Towards the end of the nineteen century, as Japan opened its doors to the West, lawns began to appear, and plant species from outside Japan were imported and used in gardens. Ogawa Jihei, Shigemori Mirei, and Nakane Kinsaku were the leading garden creators of the 20th century. They both maintained and developed the garden tradition into the modern age. It is a remarkable feature of the garden tradition that there is this apparently seamless development of the garden tradition. In fact the garden tradition established its norms and conventions relatively early, and has maintained them with great consistency over the years. Young trainee gardeners today still study the Sakuteiki. Kyoto remains the centre of garden culture in Japan, it also has the greatest concentration of historic gardens, and several temples have been designated as World Heritage sites.


To follow this blog: the 'Follow by E-mail' facility is now operating. Don't miss a beat and sign in.
Posted by Robert Ketchell at 21:50 No comments: