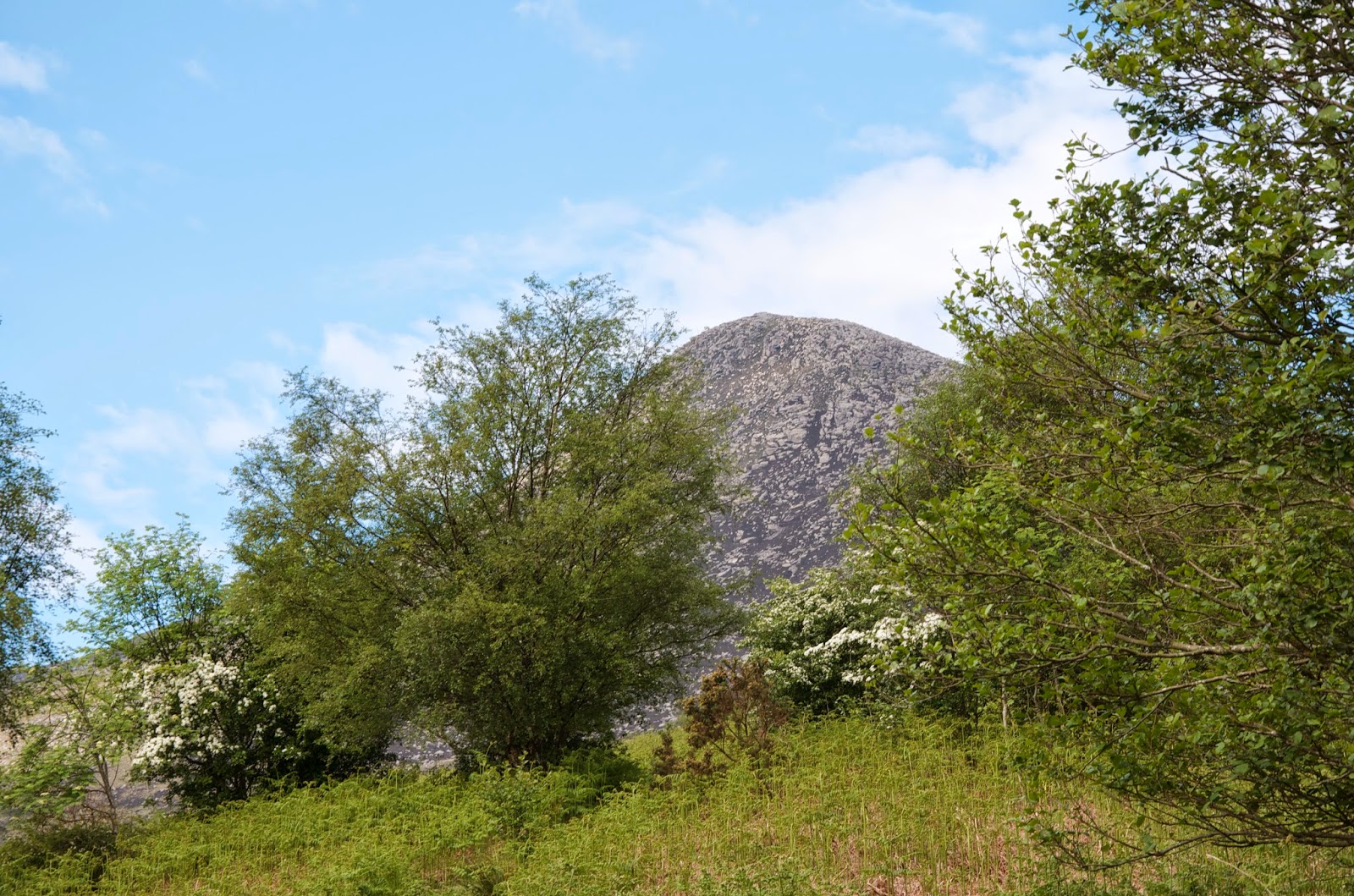 Being shaped
then re-shaped by the hill –
The weight of the earth
pulling at my legs. 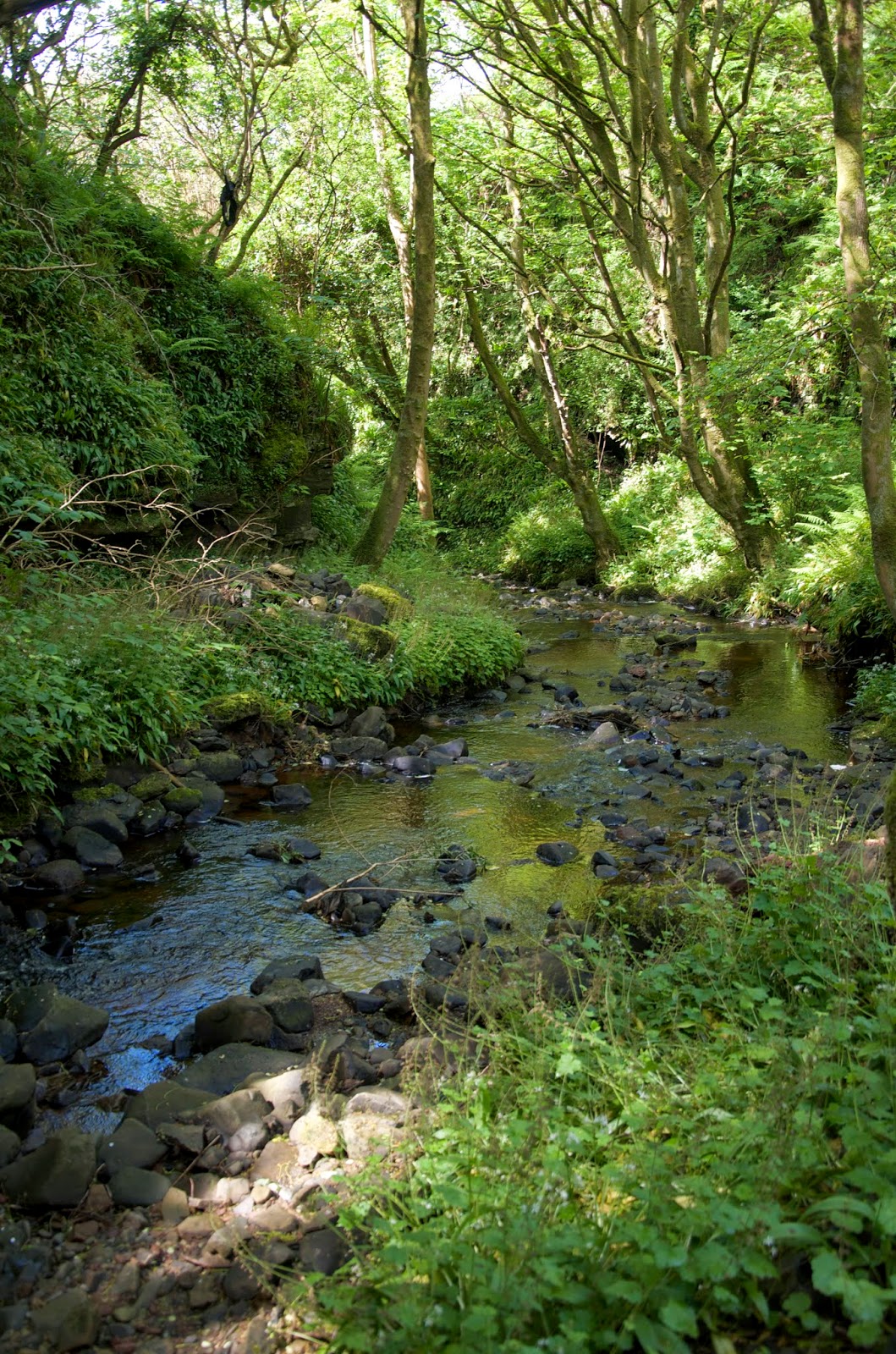 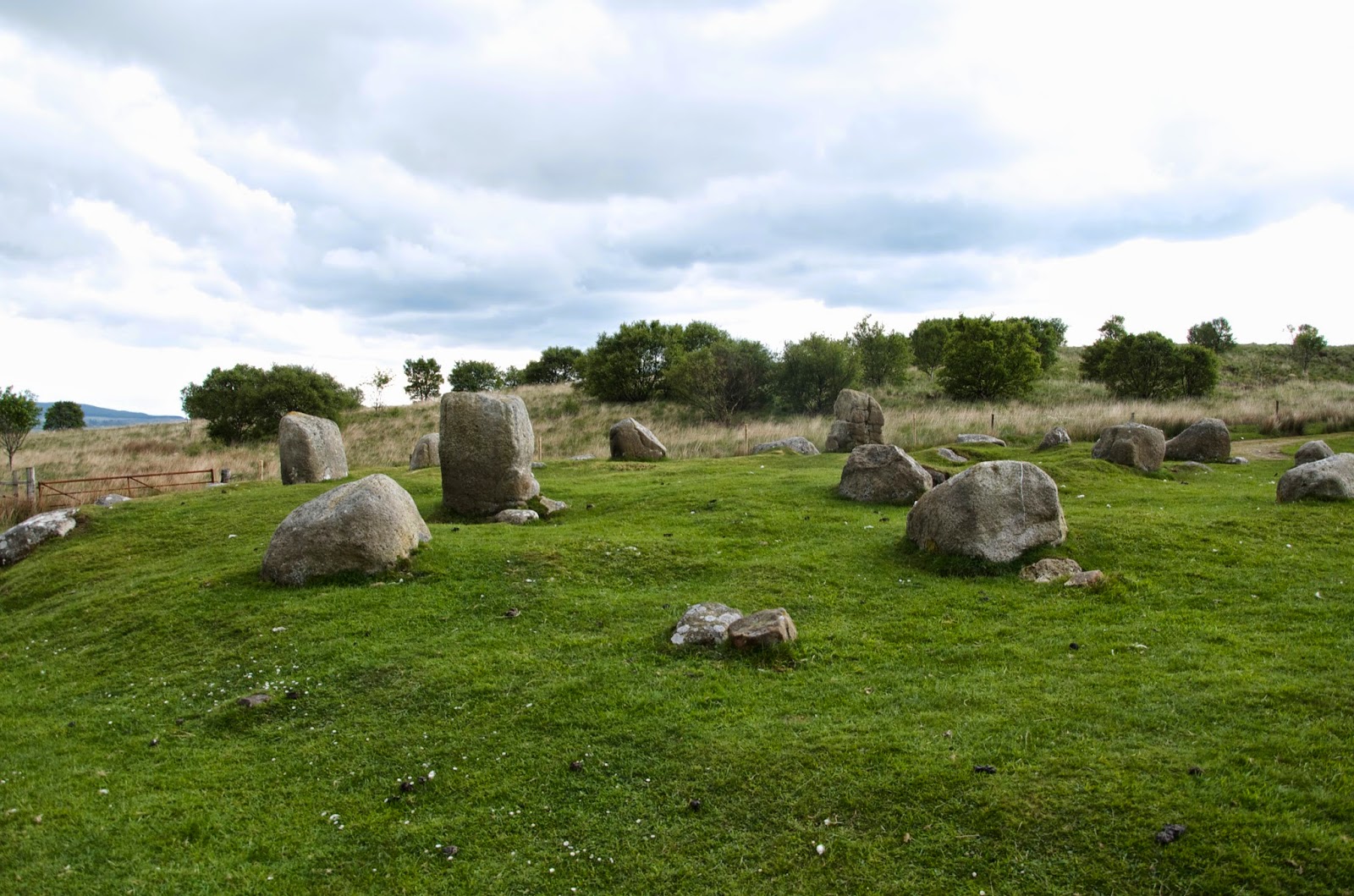 The stone arrangers had been here before


Raising heavenward sweat stained stone,
A double ring and bank –
What you saw still exists
Yet still, we come back too. 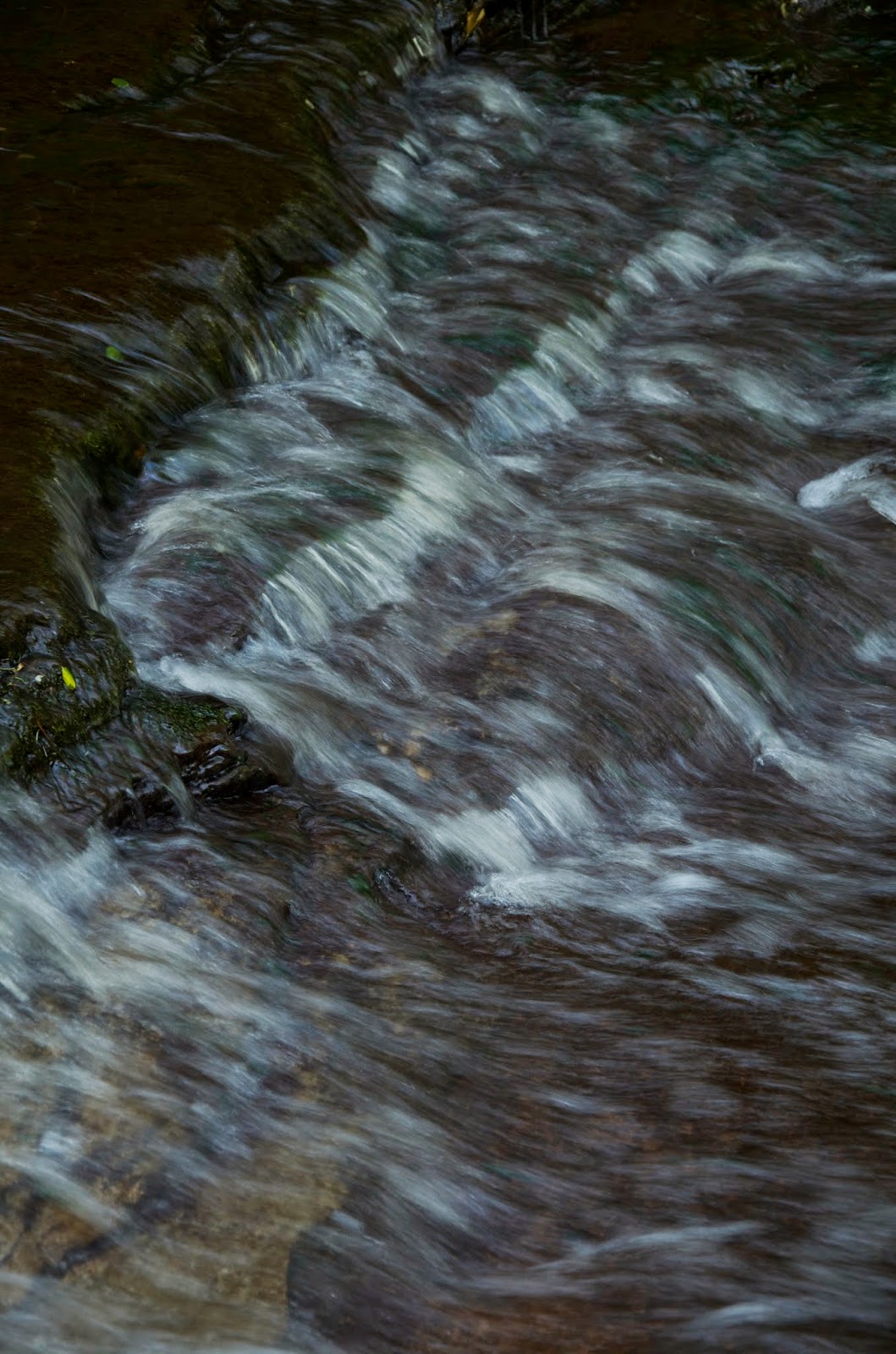 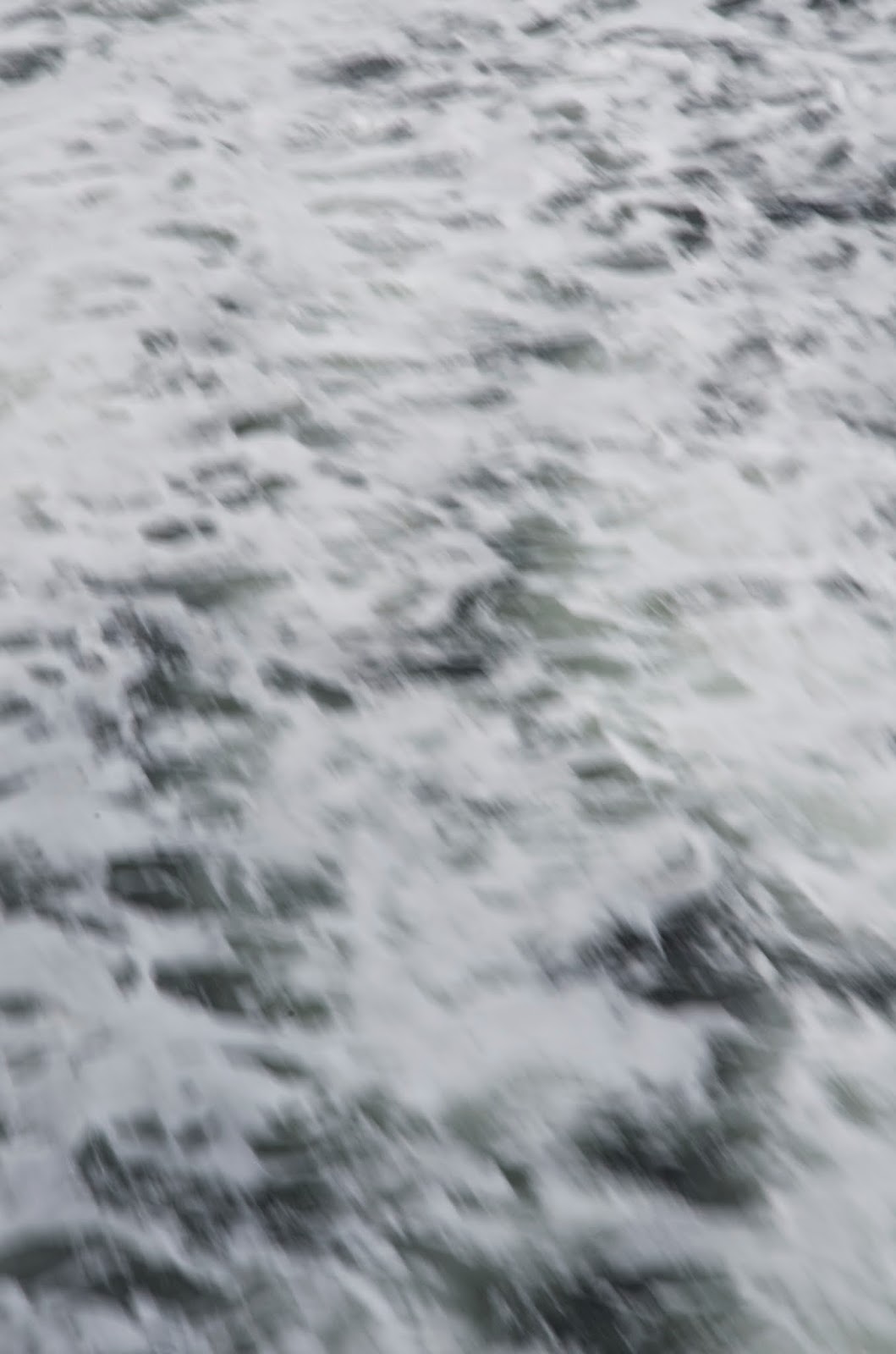 Spirit running
As the mountain itself walks.
No outside becoming inside,
It never had to move.


To follow this blog: the 'Follow by E-mail' facility is now operating. Don't miss a beat and sign in. If you enjoyed this, or any other post, please let me know! If there are specific aspects of the Japanese garden tradition you are interested in, please let me know. Thanks.
Posted by Robert Ketchell at 11:34 No comments:

Islands and the Japanese Garden

The appearance of islands has for a very long period been an important visual feature of Japanese gardens.  One only has to take a cursory glance at a map of Japan to realize that the country itself is a myriad series of islands, large and small. Mountains, water and islands are the predominate images of the landscape of Japan. The original term for a garden in Japan was shima,島, which underlines the importance of this feature to garden creation. Indeed, it can be suggested that ponds with islands have been a key feature of gardens in Japan from their very inception. The gardens were created as locations to which to attract deities from heaven, thus islands were created in garden ponds as a sacred location.

Islands have for millennia been associated with the notion of the sacred in the Far East. The legend of the Mystic Isles, or Blessed Isles, is Chinese in origin, and with its concern with immortality, very much Taoist in tone. It has also provided the Japanese garden with two of its most favoured images, Turtle and Crane Isles. It is not only in the Far East that islands have been associated with the sacred. Such symbology can also be found widely across the world, it also appears in Hindu, Greek and Christian mythology among many other cultures. Carl Jung also associated the concept of the island with the ego, being surrounded by the sea of the unconscious.

These blessed isles, P'eng-lai, Ying-chou, Fang-hu, Yuan-ch'iao and Tai-yu, were the home of the Immortals. The islands were supported on the backs of giant turtles, and the virtuous were transported out to the heavenly isles on the backs of cranes. In an encounter with a giant, two of the original isles were lost, leaving a more manageable number for garden builders to incorporate into their schemes ever since!

In the Sakuteiki 作庭記, 'Record of Garden Making, complied by Tachibana Toshitsuna in mid to late 11th century Japan are listed several types of island according to their reference to the natural landscape. Among the island styles suitable for gardens are:

Higata (干形 “Ebb-tide style”), which appears as if a partly submerged island, where beach stones can be seen below the water level.
Isojima (磯島, 磯嶋 'Rocky Shore Isle) which is characterised by many stones and planted with pines.
Kasumigata (霞形 'Mist style') a thin trailing island composed of gravel or sand without planting.
Katanagare (片流 'Slender stream'): A slender meandering island.

Yamajima (山嶋 'Mountain isle') A steeply rising island with tall rocks set about the base and covered by dense evergreen planting.

The presence of the Isles in the garden is a reminder of the function of the garden which is to represent space in a form separate and qualitatively distinct to that of the everyday world. The garden being derived from the notion of sacred or paradisal  space as well as drawing on natural landscape features.

Posted by Robert Ketchell at 13:42 No comments: 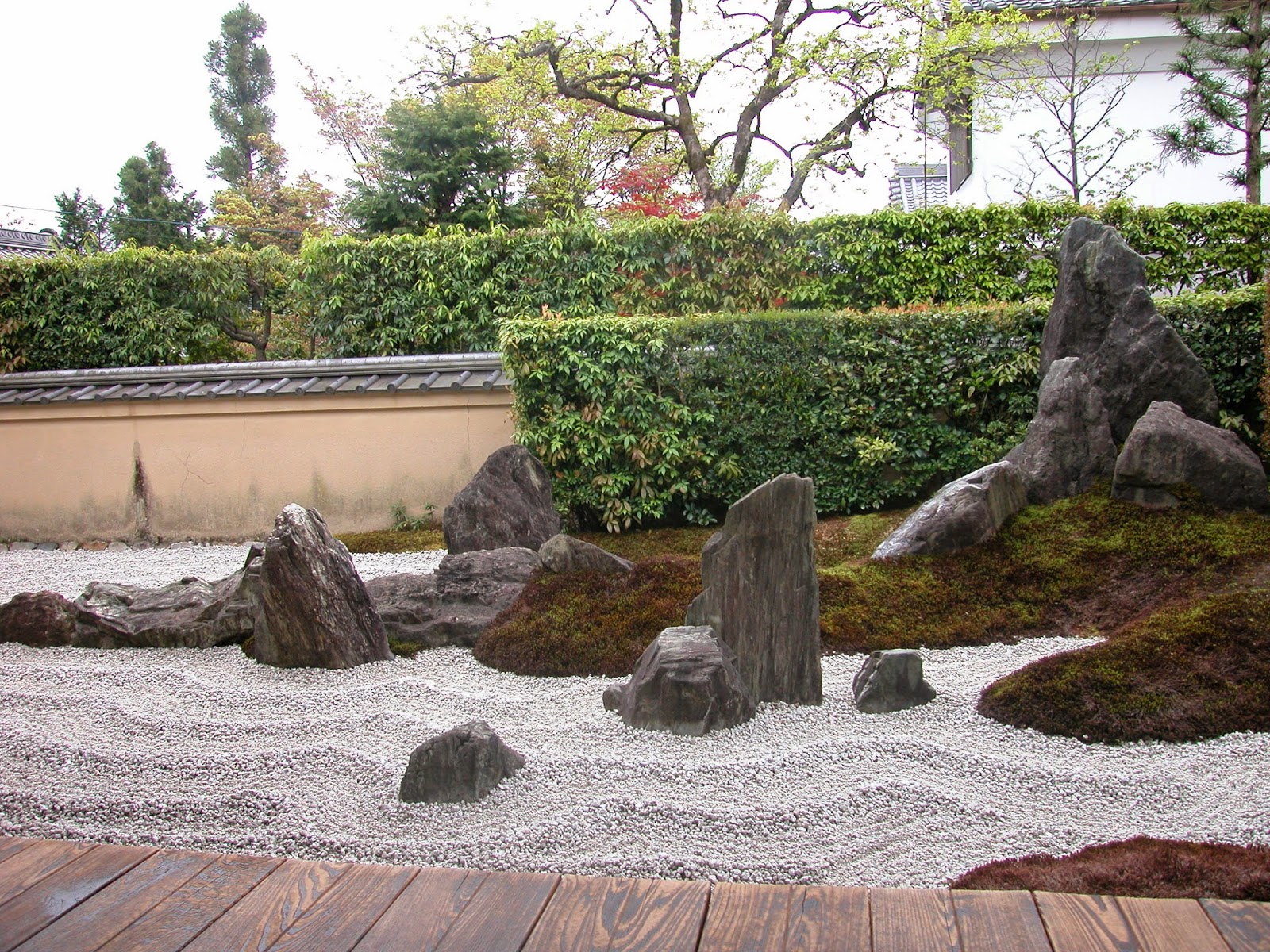 Zuihō–in is a sub-temple of the Zen Buddhist complex Daitoku-ji, located in the northern part of Kyōtō. The temple was founded in 1546 by the daimyo or feudal lord, Sōrin Ōtomo who was from Kyūshū as a memorial temple for himself and his wife, both of whom are buried at the temple. Sōrin Ōtomo was baptised as a Christian at the age of 46 which was highly unusual in Japan, particularly at a time when Christianity was under fierce pressure from suspicious authorities. There are two important gardens to the south and north sides of the hōjō or main hall; both gardens were created by Shigemori Mirei in 1961. The name Zuiho translates as ‘Blissful Mountain’ and is itself a reference to Mt Hōrai, the mythic mountain at the centre of the Buddhist universe. 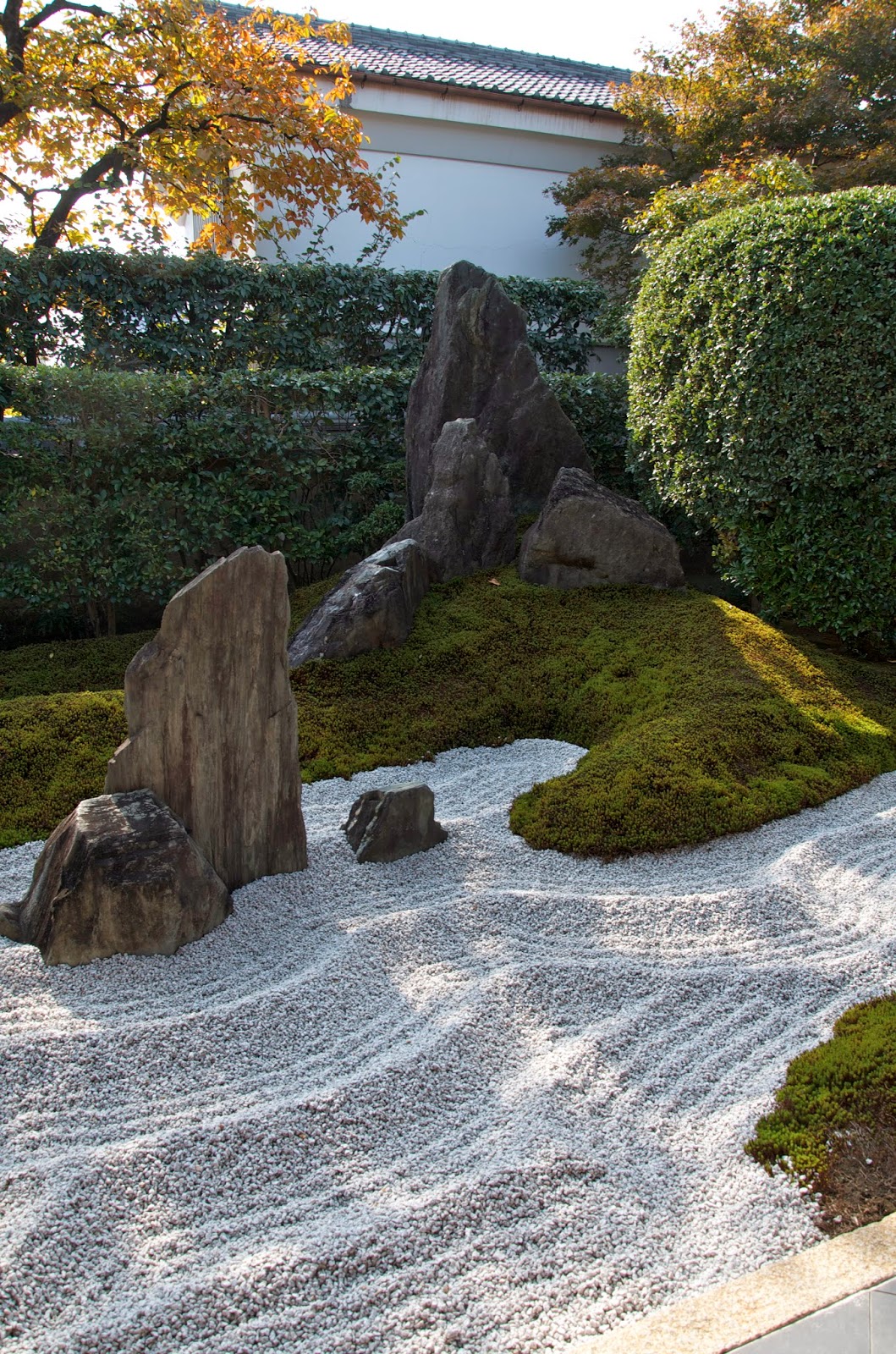 The south garden, known as Dokuza-tei (独坐庭 ) or the ‘Garden of Solitary Meditation’ is one of Mirei’s most dynamic creations. Arriving before the garden after walking along a dim corridor the power and energy of the stone arrangement is quite breathtaking. The garden space is wide and relatively narrow, giving the garden a scroll like configuration. The principal focus is on the tall, rearing, arrangement to the right side of the garden; which is centred about a tall, sharply triangular dark stone. The stone set on a raised moss covered mound which gives it additional elevation, and is close set with two additional pieces of stone which emphasize the asymmetric triangular outline of the grouping as a whole. The triad is developed by the placement of a further stone to the lower left of the main group. This stone forms a diagonal link to a smaller, also upright arrangement of stones set in the raked gravel. This ‘shadowing’ of the main group seems to ground the verticality of the principal stone, and also enhances its upward movement. As the eye continues to move (or be drawn) towards the left of the arrangement the emphasis shifts towards the horizontal plane. This section of the arrangement is often referred to as a peninsula. An alternative reading of this section would be to see the horizontal stones representing the body of a crane, and the two flanking upright stones as representing wings. The crane bird according to myth, was the means by which the enlightened ones arrived at Mt. Hōrai or paradise. The entire arrangement is anchored by a detached, solitary upright stone to the extreme left of the overall group. The whole arrangement is also referred to as a depiction of landscape scenery, with a majestic sweep of landscape from mountain to sea. The raking of the gravel is unusually dramatic, and can be read as an evocation of rough seas breaking onto a rocky coastline. The rear boundary of the garden is partially defined by a double hedge, which is also a reference to waves. The garden is a powerful statement that cuts to the heart of Zen practice, that is meditation or zazen, which can be seen as a state of detached stillness amidst constant movement and change. 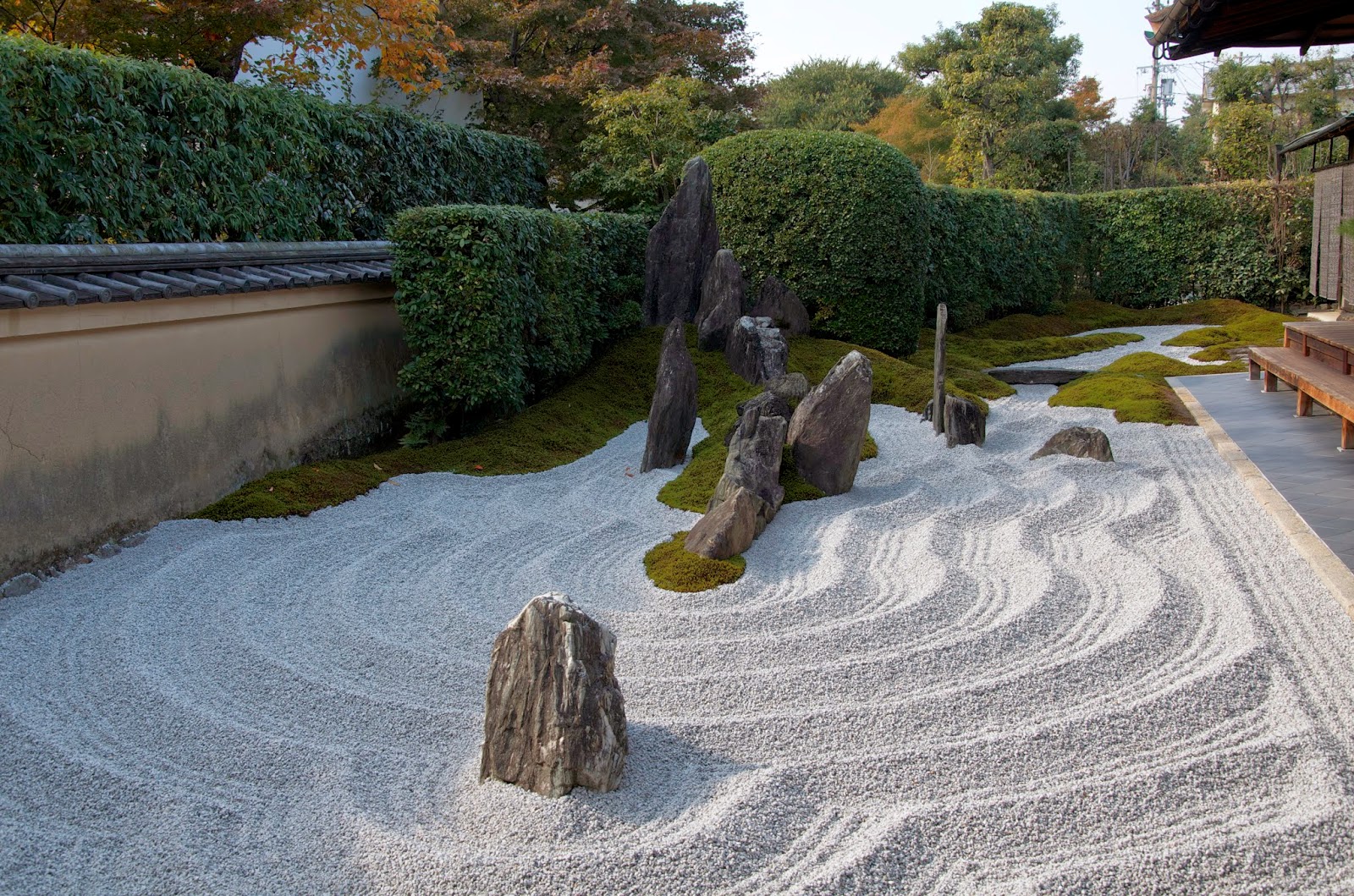 To the north side of the hōjō is the garden is formally known as  Kanmin no niwa (閑眠の庭) the ‘Quietly Sleeping Garden’ or more often referred to as the ‘Garden of the Cross’. Here Mirei skillfully evokes the fusion of the traditional karesansuii (dry landscape style) with Christian symbolism. In fact the north and south gardens taken together skilfully evoke both traditional elements (Zen Buddhism) and the imported ideas (Christianity) that mirror the religious leanings of Sōrin Ōtomo himself. 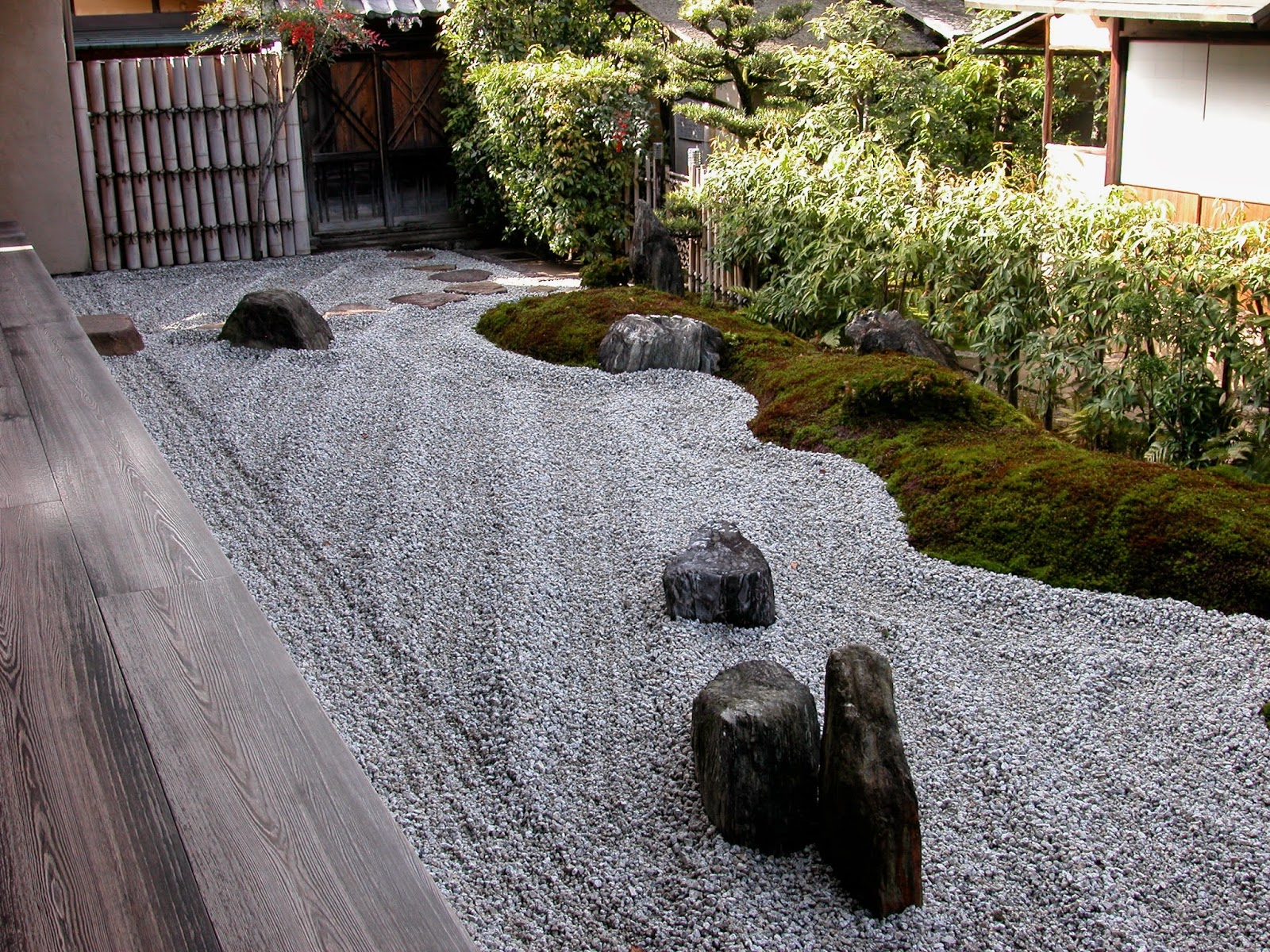 Standing at the eastern coner of the space and looking toward the north west the viewer is looking along the vertical axis of the cross. A line of three stones is set at right angles to the vertical axis, and these form the  horizontal axis. Compared to the visual drama of the south garden the stone arrangement is almost subdued in tone. Also by standing at this point to observe the cross the viewer has behind him or her a small garden area (detached from the garden space by a wooden walkway) which contains a water basin and a stone lantern. Buried below ground level (and therefore out of sight) on the stem of the lantern is carved a figure representing the Virgin Mary. This recalls the travails of Christian converts in Japan during the early 17th century, when any outward display of association with Christianity rendered practioners liable to be put to death. Hence a variety of secret or hidden symbols developed which allowed followers to practice their religion in secret, away from the prying eyes of the authorities. 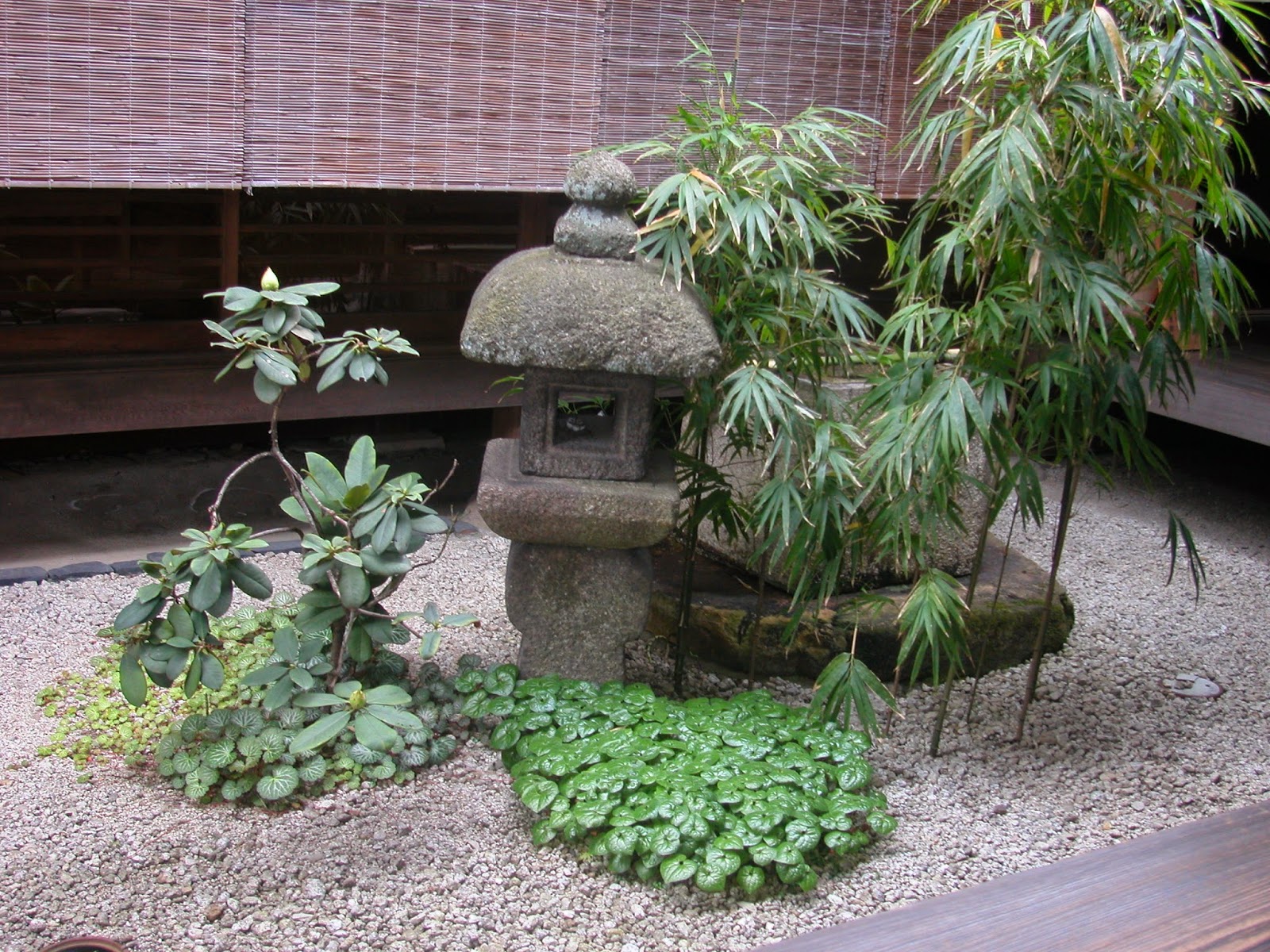 At Zuihō –in Mirei brilliantly extends the limits of the Japanese garden tradition. He pushes the symbolism of the garden beyond its traditional boundaries by utilising fully the capacity of the garden to communicate and engage with the viewer. Mirei crosses cultural boundaries, whilst never entirely discarding what can be seen as wholly traditional values. The two gardens taken together are a masterpiece of cultural and artistic interpretation.


To follow this blog: the 'Follow by E-mail' facility is now operating. Don't miss a beat and sign in. If you enjoyed this, or any other post, please let me know! If there are specific aspects of the Japanese garden tradition you are interested in, please let me know. Thanks.
Posted by Robert Ketchell at 15:40 No comments: