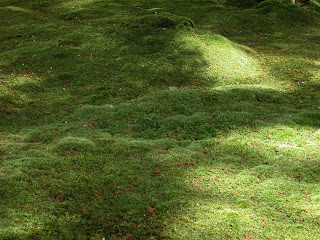 The renowned temple and garden, also popularly known as the “Moss Temple” or Kokedera is one of Kyoto's most extraordinary spaces. Its appeal stems from the depth of atmosphere which surrounds the garden area. Stepping into the gardens the visitor has a definite sense of making a quantifiable leap into what feels like another world all together. Time seems to come to greet one at the entry gateway, stepping into the garden it is almost impossible not to be moved by a sense of history. At first glance there is not much to see in the way of garden features, the visitor simply follows a path leading around a large pond, under the dense cover of trees including many maples, there are several elderly buildings; but what grasps the attention of visitors is the powerful ambience of the place. History is not something that stretches back away from the present moment away from the viewer, but at Saihō-ji one senses the presence of centuries past very much alive in the present moment. Many of the greatest religious teachers in Japan have been associated with the place, the site's attraction runs deep indeed.

The site of about four and a half acres has indeed had a very long history. On the hillside above the lower garden area are the remains of kofun (chambered) tombs dating to the period 250-552 AD, thus the temple may have initially developed as a means of regulating access to a different world, the world of souls who have passed through life. 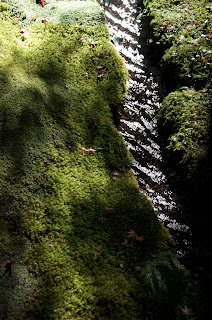 It is generally agreed that the founding of Saihō-ji was during the Nara period (AD 710 to 794)  by the priest Gyōki, who established many temples and other institutions across Japan, as well as helping to improve agricultural practices, and to spread Buddhist teachings. Gyōki was know to have established ponds at other temples, the practise had pragmatic uses as well as aesthetic ones, a nearby source of water was valuable in case of fire in wooden buildings.  Kūkai (Kōbō-Daishi) 774–835, the founder of the Shingon sect of Buddhism is said to have stayed at Saihō-ji, so the temple must have been an important centre of learning at that time. Following Kūkai's stay the temple was give to a pupil of Kūkai, Prince Shinnyo Shinno, son of Emperor Heizei. The prince is reputed to have planted many cherry trees in the area. Prince Shinnyo died in China on a pilgrimage to India, and never saw the trees mature.

Until the 1190's the temple lay abandoned when the priest Hōnen (1133 –1212), the founder of the Pure Land Buddhist sect (Jōdo-shū) restablished the temple and named it Saihō-ji ('Temple of the Western Paradise'), a reference to the direction from which Amida Buddha will arise to lead all beings to paradise. Hōnen built an Amida Hall (the principal worship location) overlooking the pond, as well as a series of other notable buildings. 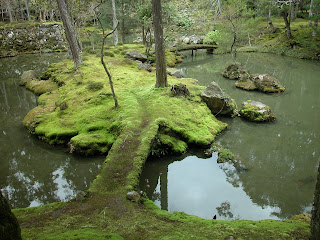 In 1399 major works of rebuilding the garden were undertaken by the priest Muso Soseki (1275-1351), a pivitol figure in the Zen Buddhist world, and at the time the acclaimed abbot of nearby Tenryu-ji temple, where he had also rebuilt the gardens. Soseki had a long record of creating gardens in the locations he visited. It seems that his plans for Saihō-ji were to make it a place where he could retreat to and meditate, a place detached from the press of his acolytes, and the intricate politics of religion. Soseki saw the whole picture, a garden of two parts. At that time the grounds of the temple extended to include the entire mountain. The mountain side would have had winding paths for walking in contemplation, and at the summit Soseki had a small pavilion created. Soseki was surely well aware the upper part of the mountain was the abode of the deceased, of spirits, and so belonged to another dimension. At the crux between the Lower and Upper garden Soseki had a gate built, the Kōjō-kan ('Upward Leading Gate'). 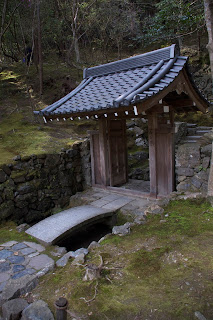 This small tiled-roof gateway is a significant element of the whole as it stands as a point of transition between the world of the living, the world where humans lived in hope of paradise, and the world of the dead. To reach the gateway the path crosses a thin stream, probably intended to perform a ritual ablution, washing off the dust of this world before one stepped through the threshold. 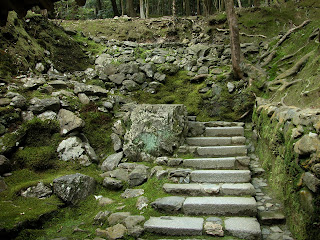 The Lower garden has a pond at its centre a highly irregular pond, it was possibly originally dug out of the clay during the Heian period, and began life in a much smaller and simpler shape. It would have seen many alterations and extensions, probably the last major alterations being made in the 14th century under the supervision of Soseki. The pond today, which is practically divided by two islands, is often interpreted as being a representation of the character ‘shin’ or ‘kokoro’, meaning ‘heart’ or ‘spirit’, which was certainly a popular feature of the 12th and 13th centuries. The site is densely wooded with many maples and gives an immediate sense of enclosure and ‘separateness’ from the world outside, the ground is entirely covered with an extraordinary patchwork of verdant mosses. 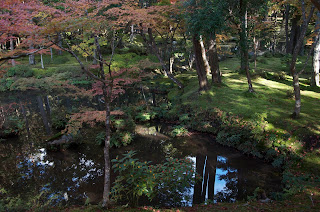 Very little in the way of features of earlier gardens remain, though one can pick out where buildings have stood in the past. yet what cannot be taken away is the extraordinary atmosphere  and sense of mood that Saiho-ji is capable of. The fall of the light through the verdant greens of the tree cover being reflected from the tapestry of mosses, can alter one’s perception by several degrees.  The garden we see today is the result of centuries of upheaval and change, and yet we can experience a profound, almost supernatural, stillness, where one's senses become extraordinarily alive. It has an atmosphere that is quite unique. 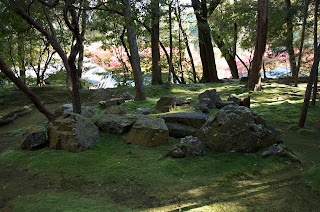 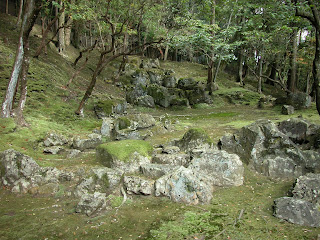 Taking the steps up from the Kōjō-kan the path winds through the trees past a superb stone arrangement which suggests Tortoise isle paddling lazily through a pea soup green ‘sea’. Further steps zigzag up the hillside to a small hall, Shitō-an ('Pointing East Hermitage')


Beside the building there is a complex  karesansui stone arrangement that can be made to represent water flowing down a broad stream with several shallow pools. It is suggested that this arrangement is the reworking of the remains of collapsed kofun, and is the work of Soseki himself. Not far away on the other side of the building is a large flat topped stone that sits by a spring source. It is thought this is one place Soseki would come to meditate. In the realm of the dead, he sits by a spring source to meditate. Soseki was reaching beyond this world to search for solutions to questions arising in this. 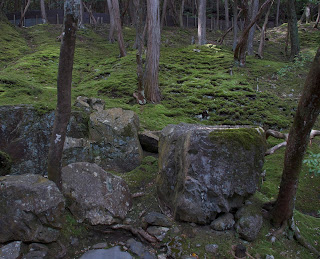 Ironically the presence of the mosses, and the unique state of Saihō-ji is essentially due to a long periods of neglect. Human hands and a great deal of serendipity, the microclimate, the presence of the ponds all these factors and who knows what else has combined to create an environment utterly unique. The garden has lost and gained beyond imagining, hence we can only really deal with that which is in front of us moment to moment. No doubting though Saihō-ji is a powerful place with a strong presence of the ethereal.
Posted by Robert Ketchell at 22:03