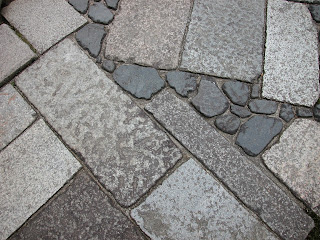 Paths are central to the structure of a Japanese garden, it may be argued that on some level the garden is in essence a 'path', one that leads the viewer from the Everyday world into a space of a different order (道, dõ in Japanese)

The path that leads from the street to the entry of a temple or traditional building will rarely lead in a direct line of access, the path will make a twist, turn or corner. The path is wide enough to be walked freely, and will be composed of a even surface. The dislocation in the line of access from the building entry to entry from the street is an influence of geomantic practice, to prevent the depletion of vital ch'i from the site (see Feng Shui ). A variety of texture in the path may be introduced through variations in the layout of the materials being used. Occasionally at the entry to a Zen temple one sees a final section of Entry path laid out as large stepping stones in a pattern of  seven, five and three stones, the numbers having potent auspicious associations thereby act as a blessing for the person approaching the building. There is such a path at Nanzen-ji, likewise at Shinju-an (both temples in Kyoto). 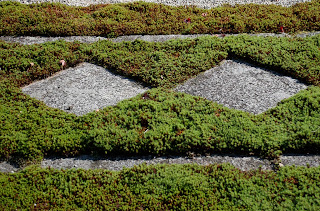 In the gardens themselves paths are generally classified into three types, Shin, Gyo, and Sõ, naturally the paths that are in close proximity to buildings or are main thoroughfares connecting buildings may be the most formal, leading to ever greater informality, Sõ, the deeper into the garden one progresses. Whilst this is often the case, it is a 'rule' that is frequently enough disregarded. In the garden context full range of expression is given to the potential of humble pieces of stone.

Whilst nowadays, tobiishi (stepping stone paths) are used with great frequency, in the garden at Katsura Rikyu there are over 1700 steppingstones used in the path system. The popularity of stepping stones did not really come into such prominence until the mid 16th century. It was after the Tea Masters began to exploit the use of steppingstones in their gardens that they became quite so common elsewhere. In the Tea garden only rough stone would be acceptable, whereas for Gyo- style paths it is acceptable to mix cut stone and rough stone in the same section of path. Sections of steppingstone path will lead to sections of pavement-type of pathways. It is a design technique to set a short pavement section of path at a point of pathway that leads immediately to a view point. Once on a pavement section of path it is natural for the viewer to raise his head and be able to take in the scenery being presented. It is only the unwise who tread along steppingstone paths without watching where their feet are being set down. Thus one can see the potential for influencing the way the garden may be perceived by manipulating the manner of surface offered to walk along. 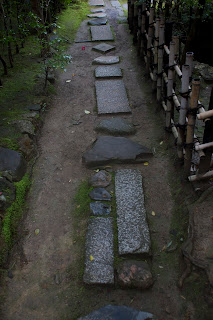 Stone slabs laid a into paths are often referred to as tanazaki-ishi or 'Poem card stones' after the strips of paper that poems and prayers are written on, Tanazaki-ishi may be laid offset in pairs. Where small stones are brought together to make up pavement sections it is important that the intersection of the stones are of a T or Y pattern, and not as an X or radial intersection. Pointing gaps of 25 - 30 mm are preferred, the pointing should come to no more than 12 mm of the top of the stone, which allows for the play of light across the surface. The mortar used sometimes has ground charcoal mixed with it to darken the colour in order to harmonise the pointing with the stone. Pavement sections of 45 cm wide are enough   for most garden situations. Black stones in a pavement section will give a sense of formality, whilst rough textured stones will give a more subtle air to the path. The pavement sections should ideally be of a comparable height from the ground to the setting of stepping stone paths.


It should also be recognised that in Japanese the word for path, 'dõ' has connotations that will inevitably have a bearing upon the way that the garden is appreciated. 'dõ' may be understood to carry the sense of a path, as a way in life. Following the 'dõ' in this way is to make a commitment with one's whole being in following  a particular course. The goal that is being sought is a measure of transcendence from the 'everyday world', that is  simply seeing the duality of the material world and failing to grasp the underlying unity of all things.  The garden being expressed essentially as a path, both physical and metaphysical, will evoke this sense in the heart of the viewer who enters and experiences the garden with "empty hands".

Posted by Robert Ketchell at 21:04