The Garden of the Ox and Oxherder revisited 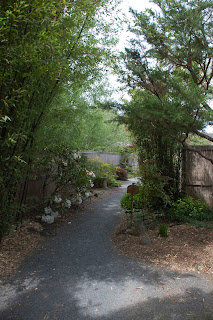 A garden is a song that never quite ends. A river that never ceases to flow. A garden is always in a state of change, season to season, moment to moment. It's all ebbs and flows, expansion and contraction, one condition becoming another. Its very movement and change defines it as what it is at any one moment. In the thirty or so years I have been creating gardens, some have worked, some have not; some have endured, some have not. You eventually understand it's a process, one that also requires surrender. For a garden to endure it needs as much intervention and interaction, and as much love and attention, as a puppy. Its a blend of nature and nurture.

One garden that has realised such an ambitious desire is the garden of the Ox and Ox-herder, at Osmosis Day Spa in Sonoma County, California (www.osmosis.com).

Michael Stusser, is the wide-eyed genie whose original vision created the magical place it has become Osmosis Spa. Our paths first crossed in Kyoto in the early '80's; we were both garden apprentices, seekers of knowledge and new visions, right in the very heart of it all. We sat and we saw beyond form and swam with the tidal pull, and I shed tears of sadness and separation the day I left Japan. It was years later, in the very infancy of a new millennium before we reconnected and Michael asked me to help with the design of a garden for the spa he had created. Even before I had seen the site, there was a picture in my mind. Clear and limpid as you like.

The story of the '10 Bulls', or 'Ox and the Ox-herder' is a parable that appears in varying forms from India, through Tibet, China to Japan, borne along the north-eastward flowing current of Buddhist thought. It eventually found itself occupying a space in my mind. I carried it like a benign virus from Japan back to England, then eventually a few years later the idea crossed the Atlantic ocean, traversed the continent of North America, and took form in Sonoma County.

The parable sets out the passage of steps on a journey from innocence to experience. In Japan the parable is usually depicted in ten stages:

1. Searching for the Ox

The very act of walking along the path toward the gate is intention. Setting a direction, setting a course of action and experience in process. The path becomes a succession of openings and closings. New neural networks are being laid, a reality being re-ordered.

Seeing the tracks is glimpsing the idea of what it is you are chasing after. The mad dream, the sensible thing, the mystic experience, a bulb flash of insight. Now your desire knows a place to place itself, you alter your behaviour to what you think is being asked of you.

Out there, where middle distance and far distance rub up against each other, you get a glimpse of something with an apparent form, you call it 'Ox'. Your goal now has a name, there is an object of your desire; a receiver and a giver beginning their dance together. Your world is being reshaped by the acquisition of new experiences.

Now you can almost grasp the goal, there is that taste in your mouth, you can scent sweat; all you need to do is reach out just that little further. In the struggle to learn we can forget to breathe, then we become rigid. To pass through the moon gate we need to surrender.

Now for the first time the viewer can see the main garden, enclosed, tranquil and enveloping as a world apart.

Taming the Ox is the beginning of the letting go of the self, seeing movement through form, seeing currents and obstacles beneath the surface. The two are still in opposition and strength is still being applied. When the subject and object remain separated and distinct, the whole picture cannot be seen.

When we let go of desire, the body softens as the rigid shell of insecurity, fear and doubt dissolves. The path continues on as it must. The nature of the goals we wish to reach change, shifting to accommodate a wider view of the world. This is a passage between layers, a point of transition. The shift is from two to One.


7. The Ox forgotten, the Self alone

From here, there are no fixed ways, no paved paths to follow.
Moving through open spaces. A view is composed of the empty
and the full. All possibilities exist as potential.

In a distant corner of the garden a single small stone remains, half forgotten. Of object and subject, only the last traces of such a distinction remain the same. The rest returns to the earth.

8. The Ox and Self forgotten

The pond surface is a mirror of the world about it, making no discriminations, no judgements, it remains still.

9. Returning to the Origin. Back to the Source.

Even 'emptiness' is not an end in itself, this is a world where everything is recognised as being interconnected; simply a pause before the next movement, the next unfolding.


10. Entering the Market with Empty Hands

Having reached full cycle,
having shed the skin
blown away the veils,
so we re-enter the world the same
yet utterly changed.
Now enabled to pass on this teaching
from the garden's heart.

The Parable of the Ox and the Ox-herder

At first, the ox was content to wander as it wished, free and untamed. No fence was stout enough, no wall robust enough to contain him.He called out to the sun and stars, he called to the mountains and waters. The Ox-herder knew where the ox roamed, where the grass was thickest, lush and deep green. But when he searched for him all he could find were the tracks of the ox in soft mud, and hear its lowing from some place unseen. Several times when he was out with ropes and had set traps, he had caught a glimpse of the Ox; yet he always returned empty-handed, his ropes unused and his traps unsprung. At last the Ox-herder’s patience and persistence got him finally within sight of the ox for days he had trailed the beast across valleys and mountainsides, just waiting for his moment. Fearing to sleep or rest in case he lost contact with his quarry, he would sing softly to himself. One day as rain fell and he kept close watch, the beast stood with its great head immersed in some bushes contentedly filling its cavernous belly with leaves and fruits. The Ox herder crept silently forward, his rope ready in hand to throw. When the moment was right he shouted the name of the ox loud enough for all the world to hear, as the birds and small animals of the forest took fright and ran in consternation and alarm. The ox raised his head from the bushes and the Ox-herder sprang swiftly forward and looped the rope around its thick, muscle solid neck.

For the ensuing days and nights the struggle raged between ox and ox herder. The beast strove to regain the freedom he had once enjoyed as a right, but the ox herder was strong and cunning. He let the ox run when he wanted to run, to bellow in anger and frustration at the sun and moon, even to scare the fish in the oceans if he wished to, but he never let loose of the rope.  The ox did not tire in body, it was more that he began to weary in his mind, it was now that the Ox-herder could notice a change when he approached the creature, its eyes were softer, less accusing. The Ox-herder would bring the ox choice branches of sweet tasting leaves and buckets of the freshest water from the streams. The ox began to realise to struggle the less was to profit the more.

In time the ox grew to accept the man as his companion, and after many weeks together they grew close enough that the man could rub his hands along the warm flanks of the ox, and cup its massive face in his hands. Autumn was coming to the landscape, and the last of the summer heat was draining into the berries and fruits, when the Ox-herder one day slipped onto the broad back of the ox. “Come now my friend, its time to be heading home, winter will soon be hear. I can hear the chill winds gathering on the other side of the mountains.” The ox lifted his huge head, and he too could catch the first far distant scent of snow. They left the mountains and waters behind, the Ox-herder perched now on the rump of the slow lumbering beast. He faced backwards as they travelled on together, and from time to time he took out his simple bamboo flute from inside his jacket, and raising it to his lips he played tunes of his own invention.

The path they followed brought them to a simple cottage, with a near by field of rice, a winding stream, and woods full of nuts, berries and game to trap and hunt. Outside of the cottage the Ox herder tethered the ox to a stout post driven into the ground. “This is our home, and now it shall be yours too,” he said to the beast as he lay out food and water for it. Then without looking back he entered the cottage, and the ox was forgotten. When his wife had set out food and drink on the table, he ate and drank according to his needs, then he stretched himself out and fell asleep for the first time in several days. Now the ox and the Ox-herder were both forgotten. As the Ox herder slept he dreamed of a vast flock of pure white birds crossing over high in an azure sky. Flying above snow-capped mountains with seemingly languid wing beats, thin legs trailing behind them, they were headed for their breeding grounds far away.

When he awoke refreshed and well rested, the Ox herder went to wash himself in the stream. There, with a soft stone and soap bearing stems of plants from the stream banks he scrubbed away the months in the mountains hunting for the ox. He shaved the stubble from his sun-bronzed cheeks and dressed in fresh clean clothes. His son and daughter came to him, and he grasped them both to his chest in a wide warm embrace. The children ran and skipped about him, their joy and delight unalloyed, and the Ox-herder smiled contentedly as life was good. When his wife brought out the baskets of berries and nuts from the forest, which she and the children had gathered in his absence, he stood and made ready to leave with them. Together they would walk, mother and father with baskets mounted on their backs and the children gambolling beside them, to sell the fruits and nuts in the market place. As they reached the outskirts of the town the children ran to their father and took the basket of fruit which they had filled themselves; they wanted to bring their own treasure to the market place. Thus the Ox-herder was destined to enter the crowded and lively market with empty hands.

Posted by Robert Ketchell at 10:06